US envoy John Kerry calls on PM Narendra Modi, briefs about upcoming Leaders Summit on climate to be hosted by President Joe Biden 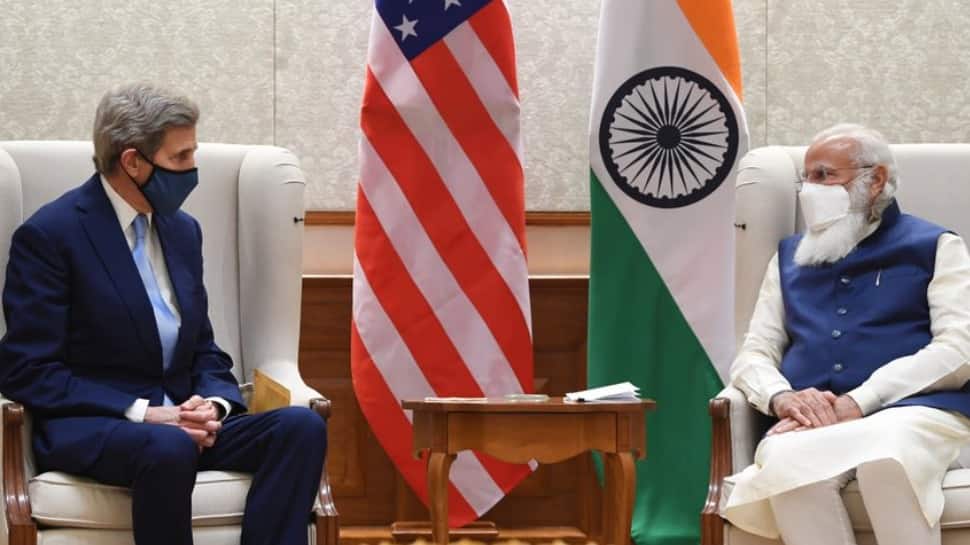 New Delhi: The US Special Presidential Envoy on Climate John Kerry called on Prime Minister Narendra Modi on Wednesday (April 7, 2021) and briefed him about the upcoming Leaders Summit on climate that will be hosted by President Joe Biden.

Kerry also briefed Prime Minister Modi on his productive discussions over the last two days in India and ‘positively noted’ India’s Climate Actions including its ambitious renewable energy plans, as per the press release by Prime Minister’s Office.

Thank you, @narendramodi, for the productive discussion. India has an ambitious 2030 climate agenda, having set a target of 450 GW of renewable energy. Looking for shared solutions to drive progress faster. https://t.co/X1mc1HBd6a

Busy day today meeting with Indian partners in support of India’s decarbonization through investment in a clean transition. pic.twitter.com/KHpb7SiyuY

PM Modi highlighted that India is committed to meeting its nationally determined contributions under the Paris Agreement and that it was among the few countries on track to meet these commitments.

Prime Minister Modi agreed that cooperation between India and the United States particularly on financing innovation and faster deployment of green technologies would have a positive demonstration effect on other countries.

Kerry conveyed greetings of President Biden to PM Modi, whereas, the Prime Minister requested the US envoy to convey his best wishes to US President and Vice President Kamala Harris.

PM Modi, notably, has accepted the United States President Joe Biden’s invite to attend the virtual climate summit on April 22 and 23. Over 40 world leaders were invited by Biden to use the Summit as an opportunity to outline how their countries also will contribute to stronger climate ambition.