The Pomegranate Harvest Is Life Here. The Taliban Shattered It. 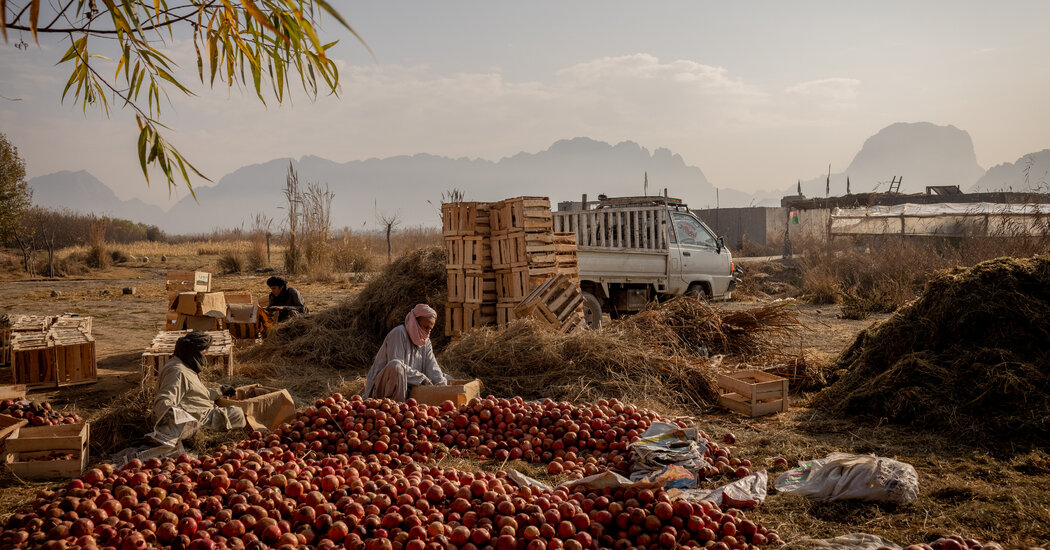 ARGHANDAB, Afghanistan — Crack a pomegranate in half and its blood-red seed-filled chambers make it look almost like a broken heart. In Arghandab district, which in Afghanistan is almost synonymous with the fruit, a Taliban offensive has cut the heart out of the harvest season, leaving farming families desperate.

The offensive here in southern Afghanistan came at the end of October, the prime month for a pomegranate harvest that goes from September to November. On a recent day this month, Gulalay Amiri and 10 of his workers gathered whatever was left in fear. Several farmers in an orchard nearby had recently been killed by buried Taliban explosives.

“When the fighting started we couldn’t come here,” said Mr. Amiri, kneeling among his workers with pink earmuffs framing his tanned and aging face. Him and his men were disappointed at how few bags and boxes they were able to fill. “Most of the pomegranates were destroyed.”

Arghandab was at the center of some of the most intense fighting at the height of the war 10 years ago, when Americans came to Kandahar Province to drive the Taliban out during President Barack Obama’s troop surge. But in recent years, locals said, things had stayed relatively quiet, and Arghandab had experienced a streak of good harvests.

But even in the midst of peace negotiations between the Taliban and Afghan government, residents described the recent fighting as the worst they had seen since the Soviets came in the 1980s, bulldozing their fields and scorching the earth.

In the broader scheme of 40 years of war, a botched pomegranate season pales in comparison to the rising violence across the country. But for the people of Arghandab — from farmer to shopkeeper, all trying to eke out livings — the fighting only highlights the uncertain fates confronting so many Afghans despite the talk of peace.

“I am faced with loss,” Mr. Amiri said, his gloved hands rotating a pomegranate, looking for rot or cracks. He had to fire 40 of his workers because of the fighting — a trend that has affected roughly 1,000 day laborers in Arghandab.

An important part of Afghanistan’s agricultural economy belongs to the pomegranate, and while domestically traded and grown in other provinces, the fruit is the pride of Kandahar. The province is a major exporter to Pakistan and India, but this year the shipments were late and smaller than usual, according to fruit exporters interviewed for this article. One said he made only a third as much as usual this year.

“The Arghandab crop was not good because we did not receive it on time,” said Jan Mohammed, 34, another pomegranate exporter based in Kandahar city. “It has not been a good year.”

The monetary losses pull down an economy already flagging, like other countries’, with the spread of the coronavirus.

Those financial impacts were acutely felt by the people of Arghandab.

Lewanai Agha, 76, in a white scarf and turban, looked on from the edge of his orchard as Mr. Amiri boxed his pomegranates. Both Mr. Agha and Mr. Amiri have farmed and sold pomegranates their entire lives, like many here, and the fruit has been a way of life for generations.

Each box of pomegranates here is proudly marked with a green stencil denoting its origin: Arghandab.

When the fighting started, Mr. Agha, himself an insurgent commander during the war against the Soviet Union in the 1980s, sent the women and children of his 32-strong family to Kandahar city while he and the other men stayed to protect his land and livestock.

“We were in the crossfire,” said Mr. Agha, his eyes narrowing as he recounted the fighting. Unable to take his fruit to market and compounded by a rainstorm, most of his pomegranates were destroyed. In 2019, Mr. Agha made roughly $9,300, he said. This year: about $620.

“The orchard was our only source of income,” Mr. Agha said. “We don’t know what else to do.”

His entire family relies on that revenue, Mr. Agha said. “This is the only time we’ve suffered like this since the Soviet invasion.” That was when Soviet troops bulldozed his orchard.

As long as Mr. Agha can pick pomegranates and feed his family, it doesn’t matter which flag — the government’s or the Taliban’s — flies over his head, he said. Mr. Agha, like many farmers caught in the unending back-and-forth struggle of the war, showed a level of antipathy toward both sides of the conflict.

Mr. Agha’s orchard sits yards away from the banks of the Arghandab River and a strategically important bridge, built more than a decade ago, that allows people and vehicles to cross on their way to and from Kandahar city.

That strip of land quickly became the Taliban’s front line, where machine gun and rocket fire was reflected in the river’s flowing waters nightly as October turned to November.

Why the Taliban attacked at the height of the harvest is unclear. A Taliban official, who spoke to The New York Times on condition of anonymity because he was not cleared to speak publicly about tactics, explained that the insurgents had not meant to push so far into Arghandab and had wanted to focus on other districts. But for some reason, he said, the fighters went farther into the orchards than planned, prompting an outcry from local elders. The fighters then withdrew — out of respect, the official said, not because of U.S. airstrikes or the government’s counterattacks.

Now with the fighting receding to other districts in the south, hidden explosives left behind in fields remain a threat to the thousands of families reliant on the pomegranate harvest. Roadside bombs have always been a staple of the Taliban, but their use in the orchards at the height of the harvest, likely to delay the government’s advance, was seen as especially cruel.

Abdullah Khan, 30, an Afghan national police commander in charge of the checkpoint that overlooked Mr. Amiri’s packaging efforts and the strategic Arghandab bridge, recalled how he could hear the rumble of the American jets overhead during the fighting.

That American bombardment was the only thing that kept the Taliban from completely overrunning the district, security officials said.

“They came in large numbers,” Mr. Khan said of the advancing Taliban. What set the recent offensive apart — the worst he had seen in his 20 years in the district — was that the insurgents did not fight with hit-and-run attacks, they came in waves and held their ground.

One of Mr. Khan’s concrete outposts at the checkpoint clearly bore the marks of a rocket strike: a shallow crater surrounded by raylike gashes from spiraling shrapnel. “No one could rescue us,” he said.

Mr. Khan insisted that the police had stayed and fought for the outpost. Nearby farmers accuse them of abandoning the post — as was said to have happened at several other police checkpoints. Mr. Khan’s men, dressed in civilian clothes, drinking tea and smoking hashish at 10 in the morning, wouldn’t say one way or the other.

With his pocket of government control now quiet, Mr. Khan and his fellow police officers have been fielding relentless complaints. Arghandab’s farmers just want to return to their orchards and fields, free of Taliban explosives and hoping for some sort of aid from the government as winter sets in.

That includes Mr. Agha and his large family.

About 3,500 families have been affected by the fighting, said Sharif Ahmad Rasuli, the district governor in Arghandab, adding that only 200 had received some sort of food aid by mid-November. Fifteen civilians were killed in the attacks, he added, including at least five farmers who later died in their fields from hidden explosives.

“If we don’t get any aid our lives will be destroyed,” Mr. Agha said. “We won’t be able to eat or fill the stomachs of our children.”