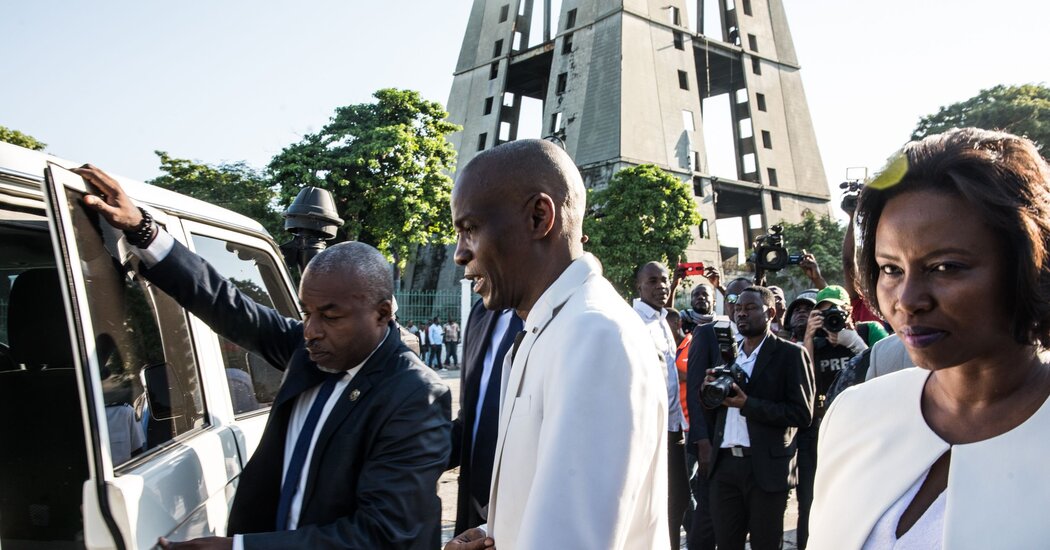 President Jovenel Moïse of Haiti was assassinated in an attack in the early hours of Wednesday at his home on the outskirts of the capital, Port-au-Prince, the prime minister said.

Mr. Moïse’s wife, Martine Moïse, was also shot in the attack, Prime Minister Claude Joseph said in a statement. Her condition was not immediately clear.

“A group of unidentified individuals, some of them speaking Spanish, attacked the private residence of the president of the republic and thus fatally wounded the head of state,” the prime minister said.

Mr. Joseph said in a telephone interview that he was the one running the country at the moment.

He said that the president had been “cowardly assassinated,” but that the murderers “cannot assassinate his ideas.”

He called on the country to “stay calm” and said he would address the nation on Wednesday. He said the country’s security situation was under the control of the police and the army.

But international observers warned that the situation could quickly spiral out of control.

Didier le Bret, the former French ambassador to Haiti, told France 24 that the political situation was volatile. A new prime minister, Ariel Henry, was scheduled to be sworn into office on Wednesday. Because that had not happened, it was not clear who was running the country, he said.

“It is a big question mark,” he said, warning that the situation could lead to wider violence.

The news rocked the impoverished Caribbean island nation 675 miles southeast of Miami. Haiti has a long history of dictatorships and coups, and democracy has never fully taken root.

In recent months, the streets of Haiti have become clogged with angry protests demanding the removal of Mr. Moïse. He had clung to power, ruling by decree for more than a year, with many — including constitutional scholars and legal experts — believing that his term had expired.

Since a devastating earthquake 11 years ago, the country has not rebuilt, and many say it is worse off, despite billions of dollars of reconstruction aid. Armed gangs control the streets and have taken to kidnapping even schoolchildren and church pastors in the middle of their services. Poverty and hunger are on the rise, and the government has been accused of enriching itself while not providing even the most basic services.

Jovenal Moïse had been struggling to quell growing public anger over his attempt to hold onto power despite the opposition’s insistence that his term had expired.

Mr. Moïse had been ruling by decree for more than a year. Many, including prominent jurists, believe that his term ended in February. Haiti has been rocked by protests against his rule, and also has suffered a surge in gang activity.

The opposition said that Mr. Moïse’s five-year term should have ended on Feb. 7, five years to the day since his predecessor, Michel Martelly, stepped down. When Mr. Moïse refused to leave office, thousands of Haitians took to the streets, setting trash and tires on fire as they demanded his resignation.

In response, the government announced the arrest of 23 people, including a top judge and a senior police officer, who the president said had tried to kill him and overthrow the government.

“The goal of these people was to make an attempt on my life,” President Moïse said at the time. “That plan was aborted.”

Mr. Moïse insisted that he had one more year to serve, because his term did not begin until a year after the vote that brought him to the top office. He argued that accusations of electoral fraud had led to that delay.

The protests this year were part of broader unrest, with heavily armed gangs clashing on the streets and attacking police stations.

“While exact numbers are still unclear, preliminary estimates suggest that thousands of people have fled their homes and sought shelter with host families or settled in informal shelters,” the United Nations Office for the Coordination of Humanitarian Affairs said last month in a report on the situation.

Despite public unrest and fragile political support, in the months before President Jovenal Moïse was killed he was pursing an aggressive agenda that included rewriting the country’s Constitution.

Among the provisions he was pushing for was one that would grant Haiti’s leader immunity for any actions while in office, leading critics to charge that he presented a threat to democracy and was setting the country on a course toward authoritarian rule.

“We need a system that works,” Mr. Moïse said in a telephone interview with The New York Times in March. “The system now doesn’t work. The president cannot work to deliver.”

The United States, whose support is critical for Haiti, had called on the country to hold presidential and legislative elections as soon as technically feasible. It also opposed the effort to draft a new constitution along the lines Mr. Moïse proposed.

Secretary of State Antony Blinken outlined the Biden administration’s tougher stance during a hearing of the House Foreign Affairs Committee in June.

Even though many were critical of Mr. Moise’s approach to reshape the government, many Haitians say a new Constitution is needed.

The current one has created two competing power centers in the country — the president and prime minister — which often leads to friction and a fractured government.

The draft Constitution would have abolished the Senate, leaving in place a single legislative body elected every five years, and replace the post of prime minister with a vice president who answers to the president, in a bid to streamline government.