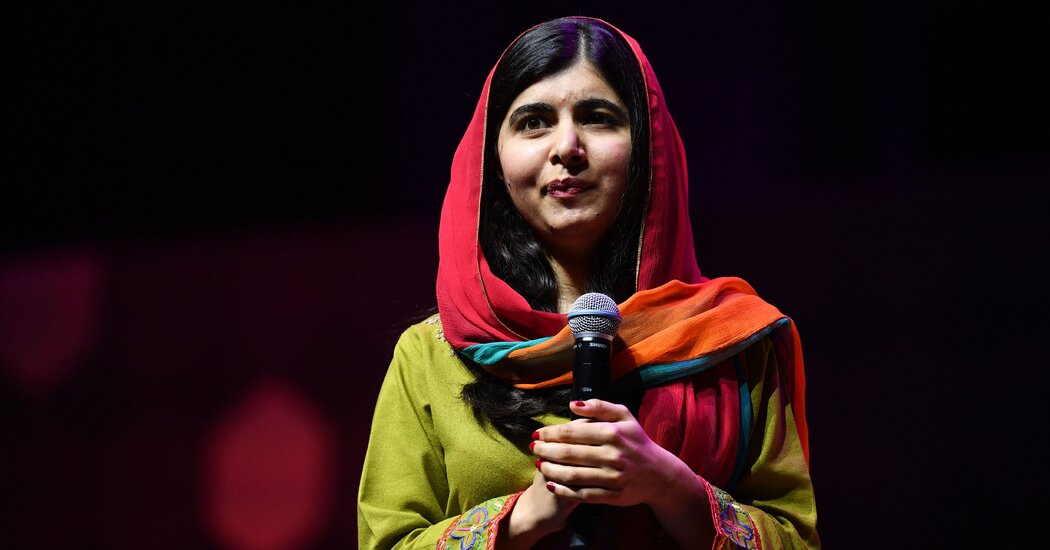 KARACHI, Pakistan — Provincial police in Pakistan this week raided bookshops and seized copies of an elementary school social studies textbook that includes a picture of the education rights activist Malala Yousafzai, a polarizing figure in the country.

The picture of Ms. Yousafzai, who won the Nobel Peace Prize in 2014, appeared in a chapter on national heroes, alongside Pakistan’s founder, Muhammad Ali Jinnah.

The world’s youngest Nobel laureate, Malala, as the 24-year-old is universally known, has been hailed worldwide as a figure of courage for her activism, despite being shot in the head as a schoolgirl by a Taliban gunman in Pakistan’s Swat Valley in 2012.

Her biography, “I am Malala,” co-written with the veteran British foreign correspondent Christina Lamb, was an international best seller. The following year, in 2014, she was awarded the Nobel Peace Prize.

But in her own country, she is the subject of fierce debate.

“For many in Pakistan, Malala has come to symbolize everything they imagine they hate about the West,” said Nida Kirmani, a professor of sociology at Lahore University of Management Sciences in Pakistan. “For others, she is a symbol of women’s rights and resistance against Islamist forces,” she added.

“For these reasons, she has become a divisive figure.”

Critics say the seizures show a desire to suppress critical thinking and a growing intolerance of opinions contrary to conservative Islamic beliefs and cultural norms.

In 2012, Taliban fighters attempted to assassinate Ms. Yousafzai on a bus returning from school after the B.B.C. website published an article about her experiences under their rule. She moved to Britain, and graduated from Oxford University last year.

Last month, in an interview with British Vogue magazine, Ms. Yousafzai, pondering where her young life may head, questioned the need for marriage, triggering a backlash in Pakistan. “I still don’t understand why people have to get married,” she said, according to the article. “If you want to have a person in your life, why do you have to sign marriage papers, why can’t it just be a partnership?”

In May, her tweet that “violence in Jerusalem — especially against children — is unbearable,” enraged a number of Pakistanis for neither mentioning the Palestinians nor condemning Israel.

The police and officials from the Punjab Curriculum and Textbook Board, a provincial authority, began conducting raids on shops across the city on Monday to confiscate copies of the book. The Board would not say how many stores were raided or how many books confiscated.

On Monday, Ms. Yousafzai’s birthday, which is celebrated by some in Pakistan as Malala Day, authorities seized the entire stock of textbooks from the Lahore office of the publisher, Oxford University Press, saying the company had failed to obtain a no-objection certification, or N.O.C., from the government.

Employees at the Oxford University Press office in Lahore declined an interview request.

On Tuesday, the All Pakistan Private Schools Federation, a body that claims to represent 150,000 schools, launched a documentary, “I am not Malala,” to highlight what it called her controversial views on Islam, marriage and her pursuit of a Western agenda.

“Parents do not want their children to follow Malala’s footsteps, even if she keeps on winning the awards,” said Kashif Mirza, the federation’s president. “Malala has fallen into the trap of the West and she is now working on a Western agenda against Pakistan and Islam.”

The same federation previously ran a campaign against Ms. Yousafzai that demanded the government ban her memoir because, they claimed, it offended Islam and the “ideology of Pakistan.”

In recent years, as the influence of Pakistan’s Taliban and other militant Islamist groups has grown, textbooks and other educational materials have come under greater scrutiny.

Riaz Shaikh, an academic based in the eastern city of Karachi who was involved in textbook development in Sindh province, said that he and his group included in textbooks Ms. Yousafzai, Mr. Salam, and Iqbal Masih, a Pakistani Christian child activist who campaigned against abusive child labor and was murdered at the age of 11. Afterward, Islamist groups targeted the textbook authors with death threats.

Dr. Bernadette L. Dean, Dr. Shaikh’s colleague in the group and a noted educator, fled Pakistan in 2015 fearing for her life.

“Sadly, Pakistani society has been developed on hatred, conspiracy theories and politicization of religion,” Dr. Shaikh said. “It is the reason that a significant portion of Pakistani population considers Malala and other heroes their villains.”

Last year, Punjab’s curriculum and textbook board banned a hundred school books in a single day because of content they described as “anti-Pakistan” and “blasphemous.” Among those banned were a children’s math textbook that included images of pigs — pork is prohibited by Islam — to explain an arithmetic problem.

Last year, the provincial parliament recommended banning three seminal books on Islam, including British author Lesley Hazleton’s “The First Muslim” and “After the Prophet,” accusing them of blasphemy.

Leading rights groups and liberal politicians have demanded that the Punjab provincial board withdraw the order to confiscate the school textbook with Ms. Yousafzai’s photos.

The Human Rights Commission of Pakistan, an independent civic watchdog, said on Tuesday that the raids were “a new low in the state’s attempts to control information and manipulate public discourse.”

On Wednesday, a member of Pakistan’s Parliament, Sherry Rehman, defended Ms. Yousafzai on the floor of the parliament.

“If you cannot consider Benazir Bhutto and Malala Yousafzai as your heroes, then only God can help you,” she said, referring to the former prime minister killed in a 2007 suicide attack in Rawalpindi. “Malala faced extremists and got a bullet in return.”