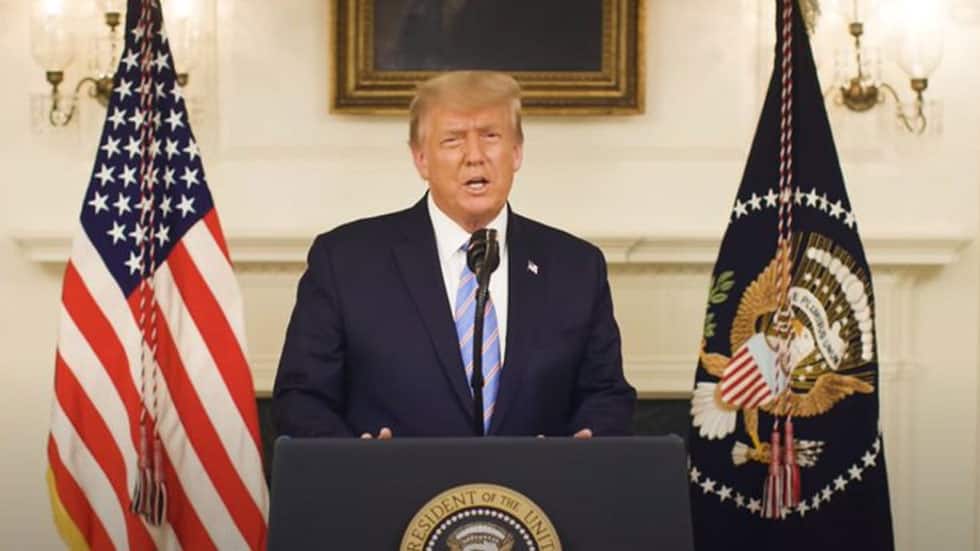 Washington: Hours, after he became the first US president to be impeached twice, Donald Trump on Wednesday (local time), released a video condemning the violence by his supporters in Capitol Hill and called for maintaining peace and avoiding a repeat of the incident.

“Mob violence goes against everything I believe in and everything our movement stands for,” Trump said addressing fellow Americans in a video message put out by the White House.

No excuses, no exception, America is a nation of laws. Those who engaged in the attacks last week will be brought to justice: US President Donald Trump https://t.co/3Q5etbUlBd

Although Trump did not speak anything on his impeachment in the video, he did refer to the ban on him by social media companies. He claimed there was an “unprecedented assault” on free speech.

“The efforts to censor, cancel and blacklist our fellow citizens are wrong and dangerous,” he said adding that “What is needed now is for us to listen to one another, not to silence one another. “Ahead of the President`s video message, the House of Representatives voted 232-297 to impeach Trump on a single article of incitement of insurrection. Now the Senate will hold a trial.

A mob of pro-Trump supporters had on January 6 breached the Capitol building in an attempt to stop the process of certifying Electoral College votes for President-elect Joe Biden. Five people died in the violence.

On January 6, during a rally at the Ellipse, just outside the White House, Trump said, “We`re going to walk down to the Capitol and we`re going to cheer on our brave senators and congressmen and women, and we`re probably not going to be cheering so much for some of them.”

“Because you`ll never take back our country with weakness. You have to show strength and you have to be strong. We have come to demand that Congress do the right thing and only count the electors who have been lawfully slated.” he further said.

“I know that everyone here will soon be marching over to the Capitol building to peacefully and patriotically make your voices heard,” he added.

Shortly after the speech, a group of Trump`s loyalists stormed the US Capitol building, clashing with police, damaging property, seizing the inauguration stage and occupying the rotunda. The outgoing President has since been blocked on all major social networks at least until after he is out of office.