For Palestinians, Israel-U. A.E. Deal Swaps One Nightmare for Another 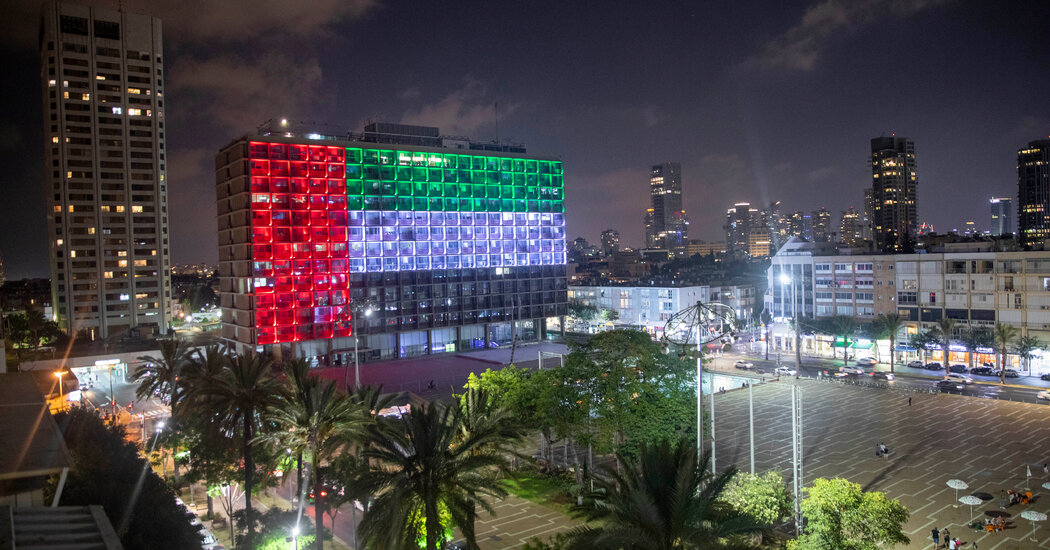 JERUSALEM — When the unmarked United Arab Emirates plane touched down on the tarmac in Tel Aviv one night in May carrying 16 tons of unsolicited medical aid for the Palestinians, it was rejected by the leadership, which said that nobody had coordinated with them about the shipment.

That was just a prelude to a greater humiliation. Palestinian officials maintain that nobody consulted with them before Thursday’s surprise announcement by President Trump that Israel and the United Arab Emirates had agreed to “full normalization of relations” in exchange for Israel suspending annexation of parts of the West Bank.

If that was presented as some kind of a balm for the Palestinians, many of them considered it, instead, a stab in the back or a dagger to the heart. The diplomatic coup for Israel ruptured decades of professed Arab unity around the Palestinian cause. It swapped one Palestinian nightmare — annexation, which many world leaders had warned would be an illegal land grab — for another, perhaps even bleaker prospect of not being counted at all.

“This agreement is very damaging to the cause of peace,” said Husam Zomlot, the head of the Palestinian mission to the United Kingdom, speaking from London, “because it takes away one of the key incentives for Israel to end its occupation — normalization with the Arab world.”

“It basically tells Israel it can have peace with an Arab country,” he added, “in return for postponing illegal theft of Palestinian land.”

Friday’s front pages blared out the disconnect. Israel’s popular Yediot Ahronot celebrated the “historic agreement” and the cut-price deal of “Peace in Exchange for Annexation.” But the Palestinian government-run Al-Hayat al-Jadida went with “Tripartite Aggression against the Rights of the Palestinian People,” in angry red letters.

The emerging Israeli-Emirati relationship is the most prominent achievement yet of what Prime Minister Benjamin Netanyahu of Israel has called an outside-in approach. That has entailed courting the outer circle of Sunni Gulf States to quietly come to terms with Israel and then bring along the Palestinians, rather than dealing with the Palestinians first.

The conservative-led Israeli government has long viewed the Palestinians as intransigent, unwilling, or unable to compromise on long-held principles that Israel sees as inflated demands, viewing them as serial quitters of peace talks.

The policy also reverses the order of the Arab Peace Initiative of 2002, a proposal endorsed by the Arab League calling for full recognition of Israel by all the Arab and Islamic nations in return for complete Israeli withdrawal from the occupied territories to the boundaries that existed before the 1967 Middle East war.

Mocking old predictions that Israel would become increasingly isolated and face a diplomatic “tsunami” for failing to resolve the Palestinian conflict, Mr. Netanyahu has instead touted economic peace and what he calls TTP — terrorism, technology and peace. Other countries, including Arab ones, he has argued, see Israel as an ally in fighting Islamist terrorism, a source of technological innovation and not as the obstacle to peace of old.

More broadly, the agreement with the United Arab Emirates reflects the realignment in the Middle East of the pro- and anti-Iranian axes, leaving the Palestinians feeling isolated and, with the suspension of annexation as the justification, used as pawns.

“MbZ tried to use us as a fig leaf,” said Nour Odeh, a Palestinian writer and analyst, referring to Mohammed bin Zayed, the crown prince of Abu Dhabi and de facto ruler of the United Arab Emirates. “Nobody buys it,” she added. “Palestine did not factor into this.”

That comes as an additional blow to the Palestinians, who rejected the Trump plan for resolving the Middle East conflict as hopelessly biased toward Israel and subsequently curbed their relations with the Trump administration. Along with fatigue in the Arab world, the Palestinians are also battling their internal demons.

The Palestinian polity has long been weak, divided between the portions of the West Bank nominally controlled by Mahmoud Abbas, the president of the Palestinian Authority, and his rivals in Hamas, the Islamic militant group that dominates the impoverished coastal territory of Gaza.

The struggle now is not just against Israel, but to remain relevant.

“Whatever happens, I’m the only thing that needs to be resolved,” said Saeb Erekat, the secretary-general of the Palestine Liberation Organization’s executive committee and its veteran chief negotiator. Insisting that ultimately, the Palestinian question could not be dismissed or ignored, he added, “I’m the fact on the ground. I’m the real fact on the ground.”

Further, Mr. Erekat noted, “There was never a single Emirati who fought the Israelis in any war. There’s no war between the Emirates and Israel.”

Indeed, Israel and the Emirates have quietly cooperated for years on security and trade. Israeli ministers have openly visited, and Israel maintains a small office at the International Renewable Energy Agency in Abu Dhabi, one of the seven Emirates. There is also a synagogue and a resident rabbi there, Levi Duchman, originally from New York.

Palestinian relations with the Emirates, by contrast, have been sour for almost a decade. Abu Dhabi plays host to Muhammad Dahlan, a former Gaza security chief turned vitriolic critic of Mr. Abbas and his nemesis in exile. Palestinian Finance Ministry records indicate that the Emirates have not sent funds to the Ramallah-based government since 2014.

“They don’t even invite us to their national day,” Mr. Erekat said.

The Emirates may also have been emboldened by the weariness of the wider Arab public and the almost apathetic response to earlier consensus-shattering moves by the Trump administration, such as recognizing Jerusalem as Israel’s capital and moving the United States embassy to the disputed city.

But Palestinian analysts said the timing of the latest announcement probably had more to do with the upcoming presidential elections in the United States.

“The Gulf countries are interested in keeping Trump in power,” said Ghassan Khatib, a political scientist at Birzeit University in the West Bank. “They were very happy with Trump’s policy on Iran and unhappy with Obama’s. So they will do anything to contribute to the re-election of Trump.”

As Oman and Bahrain praised the deal, along with Egypt, many here expected those small Gulf states to be the next to forge relations with Israel.

In Ramallah, Palestinians denounced the Emirates agreement with Israel as a shameful betrayal, but hardly seemed shocked. Soon after the announcement on Thursday night, about 20 youths and men gathered at Ashraf Hamoudeh’s café to smoke narghilas and watch a soccer match.

“This agreement will surely harm the Palestinian cause, as well as Arab interests,” said Mr. Hamoudeh, 50. “It violates the agreement among all the Arab countries that no single country can sign peace agreements with Israel unilaterally.”

Nader Said, a Ramallah-based pollster and president of the Arab World for Research and Development, a consulting firm, said the deal merely makes public and formalizes what was brewing between Israel and the Emirates all along.

But he worried that “this distraction would allow Israel to focus on consolidating its control of the West Bank by building more settlements and roads,” adding: “You would have thought that the U.A.E. would have sweetened the deal with some gestures toward Palestinians.”

On the contrary, some Israelis speculated that Mr. Netanyahu may even build more to placate elements of his right-wing base angered by his failure to fulfill the promise of annexation.

The Palestinian Authority could also find itself in a bind. Since May, to deter Israel from carrying out its annexation plans, it has curbed cooperation with Israel, including security coordination, and has refused to accept the tax revenues that Israel collects on its behalf and that make up a sizable portion of its budget. Annexation is off the table for now, but the authority may be reluctant to be seen to legitimize the Israel-Emirates deal by immediately restoring cooperation.

If there was any upside now, it may be in staving off an annexation that many analysts said could dash once and for all hopes of a future Palestinian state based on the two-state solution, the internationally accepted formula for resolving the conflict.

But Ms. Odeh, the writer and analyst, said that with constant settlement expansion, a creeping annexation was already underway.

Nothing would change in the Palestinian stance, or in Israel’s long-term strategic need to deal with it, she said, adding: “The Palestinians are not going to wither away. We are here and can be quite a nuisance. I think they should know that by now.”